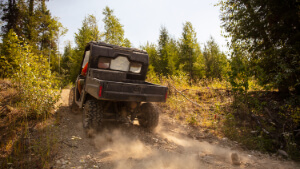 An intrepid set of wheels, UTVs can be used for work, play, or a bit of both. They bridge the gap between an ATV and a golf cart for something offering a lot of fun mixed with performance. While you may love this type of vehicle, how much do you really know about UTV history? If you have ever wondered about the history of this beloved set of wheels, there are a few interesting points you should definitely know.

There were a few inspirations behind the eventual creation of the UTV. From Jeeps without roofs during WWII to dune buggies of the 1950s, there were several inspirations behind what we now call the UTV. Another inspiration was the ATV which led the way for a new type of riding. Unlike a roofless car, this vehicle gave all the fun of an open concept in a smaller size ideal for riding over tough terrains. ATVs were the main inspiration for UTVs and copied many of the same design elements while adapting them to the new vehicle type. In the 70s, ATVs were becoming a popular choice on the market for fun riding adventures. They also paved the way for UTV history to finally find its official starting point.

The first vehicle in UTV history was the Kawasaki Mule in 1988. Mule stood for multi-use light equipment and the vehicle was a four-wheel model blending aspects of the ATV with something new. Since ATVs were being used for work purposes at that point, Kawasaki wanted to create something aimed more specifically at work needs while giving the ability to drive over a range of terrains like an ATV. While this was the first attempt at taking ATV aspects of design and building on them, it was only the start of UTV history. The Mule and similar utility terrain vehicles were made more for work than fun, but many manufacturers felt there was room for something with more edge and excitement.

The first manufacturer to win the race in creating a more exciting UTV was Yamaha with the Rhino in 2004. While the Mule was made for work purposes only, the Rhino was all about adrenaline and fun. It was the first model to be termed both a utility and a recreational vehicle thanks to the design. With a focus on tackling tough terrains at higher speeds than the Mule, the Rhino opened new doors for those looking for work and play. From there, Polaris took it to new heights by creating a model that was only meant for fun with their popular sport UTV, the RZR, in 2007. Polaris had the more utility or work-minded Ranger at the time, but the RZR was a way to open UTVs up to a new market and new fun. The RZR changed the game for where UTVs could go because of its size. While ATVs were known for recreational trail riding thanks to their width being the right size for average trails, UTVs like the Rhino were left behind because they were too wide. The RZR remedied this with all the power of a recreational UTV in a smaller width to make it the first meant for trail riding. This was a big turning point for the history of UTVs as it opened them up for more riding options. Today, the UTV market continues to try new things in order to keep up with the modern consumer. There are options made for work such as utility, options for fun such as sport, and options with a good mix of both. The UTV remains a staple on the scene for both work and play even as it continues to evolve from year to year.