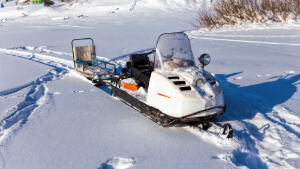 The history of the snowmobile is a young one, having begun in the 20th century. Naturally, the winter months often presented challenges to people in North America and other parts of the world with snow accumulation. After a heavy snow, traveling safely was incredibly difficult, and for some, nearly impossible. Inventors like Carl J.E. Eliason, J.-A. Bombardier, and Edgar Hetteen would be the frontrunners in snow vehicle innovation, helping set the stage for the modern day snowmobile.

Carl J.E. Eliason's design for his "motor toboggan" was patented on November 22, 1927. After working on the design for nearly five years, his invention would change the future of snow travel. Looking at the patent, it may not seem much. A wooden toboggan on fixed skis powered by a small motor that an operator would steer with rope. However, it was revolutionary for the Roaring Twenties. While others were patenting snow vehicle inventions in the U.S., Eliason's "motor toboggan" was the only one to have been mass-produced. There was yet another inventor working away at creating the perfect snow vehicle. This was Quebec mechanic Joseph-Armand Bombardier.

10 years after Eliason, J.-A. Bombardier is granted a patent for his tracked vehicle for traversing over snow. This was the "B7", a large snow bus that held seven passengers. This snow vehicle wore many hats. It acted as an ambulance, school bus, mail carrier, and more. This greatly improved the lives of people all around the city. After World War II, he began focusing on creating a snowmobile that could hold one or two people. After developing a rubber track that was able to provide traction in the snow, Bombardier released the "Ski-Dog" in the late 1950s. Designed to replace dog sleds, the snowmobile became a useful tool for both work and play. After a fateful typo of "Ski-Dog" to "Ski-Doo", the name simply stuck. At last in 1959, the first Ski-Doo was launched. All of Bombardier's work on making a lightweight, easily maneuvered, and fast snowmobile was present in this vehicle. With this, the sport of snowmobiling as recreation came about, with thousands taking part in these groundbreaking inventions. His work lives on today in BRM.

However, neither of these men were granted the title "Father of the Snowmobile" – that was Edgar Hetteen's claim, bequeathed by the Snowmobile Hall of Fame. In Roseau, Minnesota, the harsh winters provoked the Hetten brothers and their employees to develop a solution. While away on a business trip, his brother, Allan, and friend David Johnson, worked on a prototype of a vehicle that could travel through snow. At first, Edgar was dismayed at their use of funds to create the prototype and skeptical of the value. However, after continued work on their snowmobile design, the Polaris Sno Traveler was created, and the first model launched in 1956. Now an advocate for the vehicle, Edgar Hetteen promoted the Sno Traveler on a 1,200 mile ride through Alaska. Shortly after, in the face of internal turmoil, he left the company and began what would be later known as Arctic Cat. Even still, Polaris moved on without him, continuing into the 1960s with the Comet and Mustang snowmobiles.

Yamaha has a place in this story, too. In 1965, Yamaha developed their first snowmobile prototype, the YX15. It was tested in the Nakatajima Dunes as well as Tateyama, Shigakogen. Testing in North America went incredibly poorly, to the point that the prototype was completely canceled. Yamaha returned to the snowmobile scene with a 2nd attempt in 1967, in which they were met with technological challenges. The team worked diligently on perfecting the design of the new model, and in 1968 Yamaha introduced the SL350. A year later, they were able to release three more snowmobiles. In 2007, Yamaha was the only snowmobile manufacturer to use a four-stroke engine in all of its models. They would make history once again in 2019 with their partnership with Arctic Cat, developing the world's most powerful snowmobile engine with the release of the SideWinder and 9000-series lineups.

Today, snowmobiles are light, high-powered machines that can carve down mountainsides and race through snowy terrain like never before. Built with either two or four-stroke internal combustion engines, the snowmobiles on the market now are used for hunting, sport, work, and recreation. It is humbling to think back to a time where snow travel was virtually impossible. With the onset of snowmobiles (and modern vehicles, of course), riders can now glide overtop snow all thanks to the inventive minds of Eliason, Bombardier, and the men of Polaris and Yamaha.