How to Replace Reed Cages 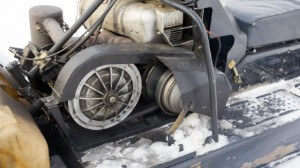 Of all the assemblies and parts on a typical two-stroke snowmobile, reed valves might be one of the most neglected. All too often, snowmobiling enthusiasts compromise on performance or deal with an engine that's difficult to start because of worn reed petals. Laziness isn't a good excuse for letting worn reed petals ruin a fun-filled snowmobiling season. By reading this guide, you will learn how to replace reed cages and receive helpful maintenance tips along the way. With the proper tools and a push in the right direction, you can keep your sled ready for the snowy trails ahead.

In any pre-season snowmobile maintenance schedule, the reed valve system should be at the top of the list. A snowmobile's reed valve system is responsible for preparing and feeding the air and fuel required for combustion into the sled's cylinder heads. When an engine is hard to start or you are experiencing a horsepower loss, you can generally assume that the engine reeds are improperly set up or the reed valve system requires your immediate attention.

There are many reasons why reed petals wear out, but it is usually caused by constant flexing, and the passing of fuel causes chips, cracks, or curled edges as the solidified resin used to manufacture the petal softens. Hard starting is a symptom of low compression, which may require a few extra pulls on the recoil handle to get the engine going. Poor throttle response is usually a sign that the reed petals may be worn and need to be replaced. Though you can baby the throttle and keep our engine speeds low, there isn't much you can do to prolong the life of your reed petals. We recommend pulling out the reed cages and examining the petals every 2,000 miles, depending on how often you ride.

How to Replace Reed Cages

Replacing the petals in your sled's two-stroke, reed-inducted engine may seem daunting, but it's actually pretty easy!

Now that you know how to replace reed cages, you can take every step necessary to keep your snowmobile's reed valve system in tip-top shape. At Polaris Parts Nation, we proudly offer an assortment of reed valve replacements and complete reed cage assemblies for Polaris liquid-cooled engines. If you have any questions about this guide or would like to learn more about the available parts in our inventory, please contact us today for additional information.